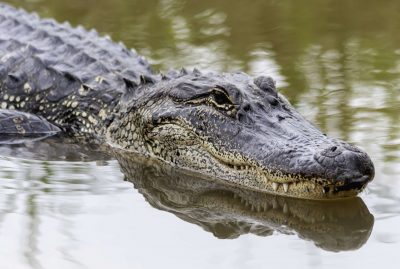 A wayward reptile made quite a splash.

An alligator made a trip in seemingly an odd way:
He went from “Loosiana” to the island known as Padre.
Now, how he got to Texas from his homestead in the bayou
remains a mystery: it’s too far to swim, or him to fly to.

An alligator’s native habitat is in freshwater;
to find one on a sandy gulf beach makes him a marauder.
A long way to that shore from his indigenous swamp glade –
some tags found on his feet were proof of just how far he’d strayed.

He’d traveled several hundred miles, exhausted but not kidnapped.
Once caught a glimpse of on that beach, some wildlife experts with rapt
and compassionate attention handled him with gentle touch.
Let’s hope he’s on the mend – and won’t become some lady’s clutch.