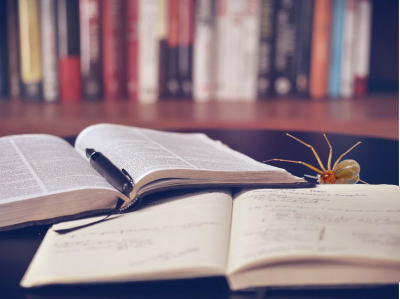 Discovery of a pernicious pest forced the closure of a university library.

Most people aren’t worried, when taking out books,
that arachnids are hiding in crannies and nooks.
The place you’ll find students on term papers working
is where you might least expect spiders are lurking.

A Michigan library, to their chagrin,
found that they’d been invaded by bugs; ones that spin
sticky webs, which don’t normally scare girls and boys when
encountered – unless they are loaded with poison.

An insect has six legs, a spider has eight –
but who’s counting when venom is sealing your fate?
A leisurely stroll through the library stacks
should be largely precluded from spider attacks.

An effort was made that should at best console
those who find reassurance in strict pest control.
The risk of a bite should be infinitesimal
when browsing the system known as Dewey Decimal.